Amanda and I on top of Monserrate, overlooking Bogotá.

So we made it. Colombia wasn’t a land full of coke-snorting outlaws and deranged guerrillas. Well, at least we didn’t run into any during our 16-day, cross-country trek. Overall, the country was everything we thought it would be.

We quickly realized that this wasn’t a vacation. We didn’t spend all of our time lazing on the beach and zip-lining. A ton of time was spent waiting for buses/planes, on buses/planes and trying to figure out where the hell we were going. But that’s what made it not a vacation, but an adventure. Our airline went bankrupt. One of our Colombian airline’s planes crashed. A car bomb went off in Bogotá when we were there. And it was one hell of an experience.

And trying to put all of this short trip (believe me, we met dozens of travelers along the way, and none were traveling for less than a month) into a neat and tidy blog post is pretty impossible. There is no way I can get in every detail/observation without writing for six hours straight and sounding like a douche in the process.

So to avoid being a douche (always a priority in my daily life), I’m going to try to capture the magic of this Colombia trip in a brisk form. I’ll give my thoughts on all of the cities we saw and end it with a list of some casual observations about Colombian life over a few blog posts over the next few days. Just click on the pictures for larger views.

At the end of the day, I realized that traveling needs to be a big part of my life. There’s just too much world out there to stay in one place your whole life.

Bogotá- Our introduction to Colombia was quick and dirty. We arrived at 9:30 at night, confusedly made our way through immigration and customs, somehow located a cab and relied on blind faith that we’d wind up at our hostel. We left the next day for Villa de Leyva but returned two days later. All in all, we were here for about four days.

Our hostel for our time in Bogotá, the Chocolate Hostel. Highly recommended.

I’m honestly surprised by how much I liked the capital city. We had heard it was dangerous and that the weather was bad. Well we must have lucked out. No muggings and we caught cool 60-degree days with sunshine. As far as sightseeing goes, Bogotá had the most to do. We started with a trip up Monserrate, the mountain that helps form the eastern boundary of the city. We took a weird-angled train called the funicular up the mountain on Sunday with a ton of other tourists (almost all Colombian). There’s a giant, old Catholic church on top that pilgrims trek to every week and the views were breathtaking. The city is really, really big, about 8 million with the surrounding communities. And it just goes on and on. 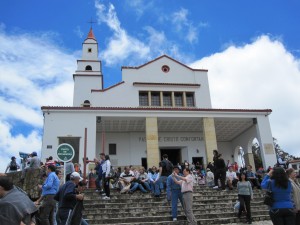 The cathedral on top of Monserrate, complete with touristy swarms.

There's gold in them tharr hills!

A tour around Quinta de Bolivar (a mansion in the shadow of Monserrate with a sprawling garden where Simon Bolivar lived on and off for a few years after liberating Colombia from Spain). 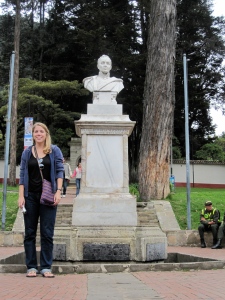 Bolivar, the Elvis of Colombia.

The National Police Museum (probably the most interesting tour that featured a ton of police-related stuff, including just about everything Pablo Escobar touched. Also learned that D.A.R.E. is also used in Colombia, even the hokey lion mascot.)

Nothing says "Colombia" like a model of a dead Pablo Escobar at the police museum.

Museo Botero (Botero is everywhere in Colombia for obvious reasons. He’s the most famed Colombian artist and his stuff is, well, ridiculous. All fat, all the time.) 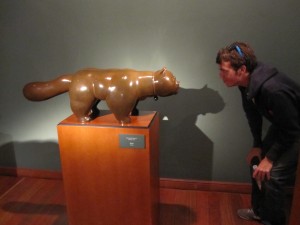 Fat bronze cats bring out the best in me.

Aside from those sights, we spent a lot of time wandering through La Candelaria, the old town, looking at the beautiful architecture, centuries-old churches and trying to feel authentic. We also ate at a cafe that has been open since the 1800s and drank some hot chocolate with cheese along with a giant tamale. It’s a weird taste but not bad. Authenticity completed. 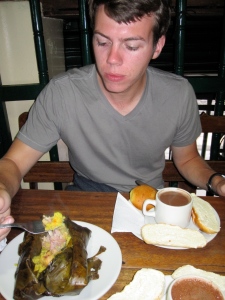 Some cheese with your chocolate? At La Puerta Falsa.

We also spend a night in the “Zona Rosa,” which is Bogotá’s rich district of bars and restaurants. We had a pitcher of beer at Bogotá Beer Company, a place that would look at home in Southlake Town Center. 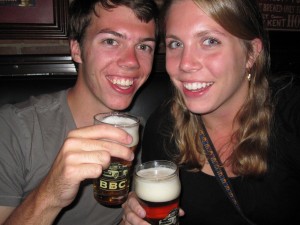 It was weird going to a bar in Colombia that's nicer than the bars I frequent in Austin.

Overall assessment: Bogotá is definitely a big city. People, taxis, motorcycles and buses crowd the city at all hours. But it was a beautiful city in a gritty kind of way. It has the colonial, Spanish flair mixed with rough, ugly exterior of modern industry–a perfect representation of Colombia today.

One response to “The Great Colombian Adventure: Bogotá”